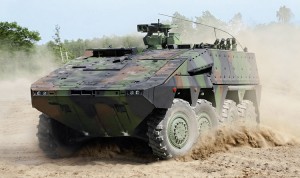 One of the most trusted names in the global defence and security sector, Rheinmetall Defence is part of Rheinmetall AG, a globe-spanning technology group serving the international automotive industry and the armed forces of numerous nations. As one of Europe’s leading makers of systems and equipment for ground forces, Rheinmetall Defence supplies a wide array of hardware for enhancing the mobility, situational awareness, lethality and survivability of troops deployed in harm’s way, coupled with network solutions for joint and combined operations.

Particularly when it comes to force protection, in recent years Rheinmetall has broken new ground, systematically expanding its product range. A solution-driven commitment to the needs of the customer has been a hallmark of Rheinmetall Defence for decades. A joint venture of the Rheinmetall Group and MAN Nutzfahrzeuge AG, RMMV has emerged as a comprehensive supplier of wheeled military vehicles, offering a full range of protected and non-protected transport, C4I and mission-specific vehicles for military operations both at home and abroad.

RMMV, the world’s leading source of mobile CBRN reconnaissance systems for military applications and civil defence, meets the wide-ranging requirements of customers around the globe.

The Fuchs/Fox NBC reconnaissance system: The NBC-RS version of the tried-and-tested Fuchs/Fox armoured transport vehicle is used by the military to detect nuclear, chemical and biological threats. A highly efficient means of reconnoitering and detecting CBRN agents, the state-of-the-art “Spürfuchs” is the mainstay of the CBRN corps of several of the world’s leading armies. The system is in service worldwide, demonstrating its effectiveness and reliability on a daily basis.